Macao There isn’t a single face exposed in the cavernous Galaxy casino. Everyone is wearing a mask, including the croupiers, waitresses and security guards — who happen to vastly outnumber the scattered customers gambling at blackjack and roulette tables.

Visitors only momentarily drop their masks at the entrances to the casino, to pose for thermal cameras on the lookout for the deadly Wuhan coronavirus that has killed hundreds of people in mainland China and infected thousands more.
The outbreak has left the free-wheeling, semi-autonomous Chinese territory of Macao shell-shocked.
Last year, the city received almost 40 million visitors. Now, streets and squares once teeming with tourists from mainland China are empty. Ambulances roam the city, operated by emergency workers dressed in hazardous materials suits. 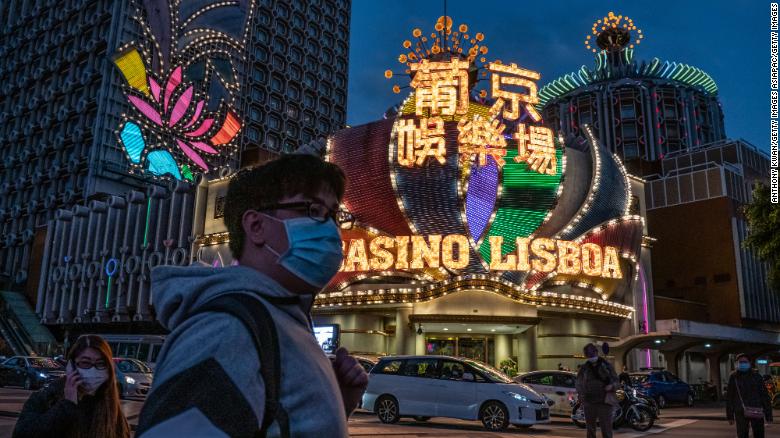 People wearing face masks walk in front of the Grand Lisboa Hotel on January 28, 2020 in Macao.

According to the Macao government, January tourism figures plunged 87% compared to the previous year, even though the busiest holiday of the year — Lunar New Year — fell in that period.
Hotels that were nearly at 100% capacity during the 2019 Lunar New Year were left half empty.
The health scare has threatened the business model at the heart of Macao’s economy. The unofficial gambling capital of the world depends on millions of visitors from mainland China.
But now administrators are trying to ensure that the deadly new coronavirus first discovered last December in the Chinese city of Wuhan does not take root in this tiny former Portuguese colony.
In January, police went from hotel to hotel, rounding up hundreds of visitors from Hubei province, where Wuhan is located. Each person was given a choice: either go home or go into quarantine for two weeks.
As of February 1, the dragnet had failed to track down more than 100 tourists from the region.
“We are still targeting different Hubei tourists,” Chio Song Un, Macao’s police commissioner, said at a press conference on Friday.
At that briefing, 11 officials from the city government sat wearing masks, addressing a room full of journalists who had been instructed to also cover their faces.
Ao Leong Lu, Macao’s secretary for social affairs and culture, urged residents to avoid gathering in large numbers. Her administration also announced schools would be closed indefinitely.
“I never saw this in my life and I’ve been here since 1981,” Albano Martins, an economist who worked in the city’s administration when it was still a Portuguese colony, told CNN.
He warned that Macao faces a major threat to its economy: “If this effect still continue for two, three months more, we may have a two-digit contraction.” 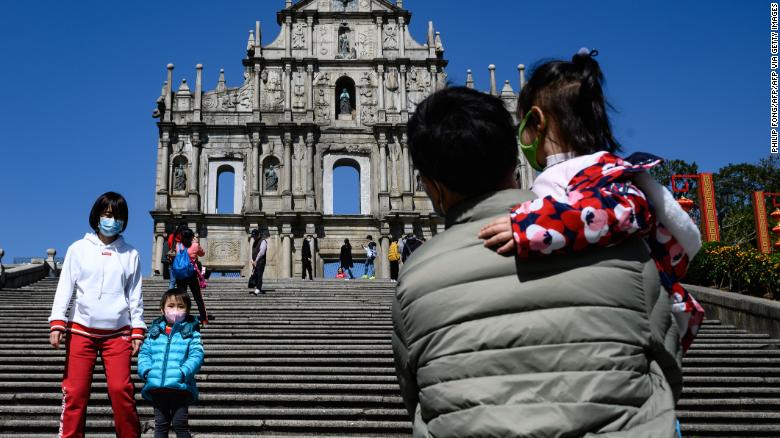 At Macao’s main public hospital, hospital staff wait at the entrance dressed head-to-toe in plastic protective gear.
The coronavirus isolation ward, located on the top floor, has a ventilation system that pumps out and filters air from the patients’ rooms.
On Sunday, administrators announced the discovery of the city’s eighth case of coronavirus. They say a 64-year-old woman who never traveled to Hubei province, but did reportedly purchase live poultry from a wet market in China’s southern Guangdong province, was being treated for moderate symptoms the virus.
Her husband, as well as a doctor and nurse who had been in contact with her, were all in protective isolation, Vitor Moutinho, a spokesperson with Macao’s Health Bureau, told CNN.
Meanwhile, the city government has also urged companies to provide housing for non-resident employees.
With a population of 600,000 — microscopic by Chinese city standards — Macao doesn’t only rely on tourists from mainland China, with a sizeable chunk of its workforce also crossing the border every day. 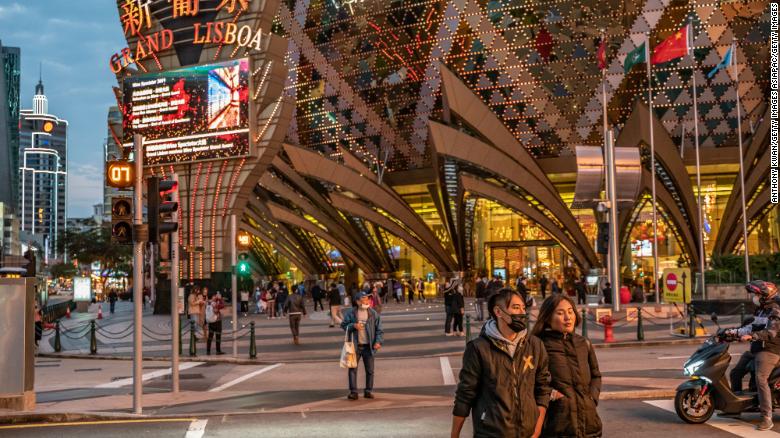 People wearing face masks walk in front of the Grand Lisboa Hotel on January 28, 2020 in Macao.
City officials say a man and a woman in the neighboring Chinese city of Zhuhai have been diagnosed with coronavirus. Both worked in and around Macao’s casinos.
One casino workers’ union is calling for Macao to close its casinos and hotels, echoing similar calls in nearby Hong Kong. That city has already cut border crossings by 80% and instituted new traveler checks.
Cloee Chao, president of New Macao Gaming Staff Rights, estimates the number of casino customers has plunged to less than 10% of normal activity — meaning a full closure would not have a significantly worse effect on the economy.
“Shutting down the casinos is the best way to protect the staff,” she said.
Despite the concern, the government has so far drawn a line against closing Macao’s glittering gambling houses.
However, asked whether this could be considered in future, Macao’s Secretary for Economy and Finance told CNN he was not ruling it out.
“We need to trust science and we need to believe in the risk management we have conducted,” Lei Wai Nong said. “At this point in time, the casinos in Macao are totally safe.”

Weight loss: How much apple cider vinegar should you drink to...

Lenovo ThinkPad P1 is the thinnest and lightest work laptop ever

European Parliament votes to punish Hungary for erosion of democracy