Home Lifestyle Sondland testimony could be pivotal point of impeachment showdown
Share
Facebook
Twitter
Google+
Pinterest
WhatsApp
The ambassador will testify Wednesday in the most consequential moment yet in the House impeachment inquiry with his own, and President Donald Trump’s future at significant risk.
Democrats view the hotel tycoon and Republican mega donor as the co-conspirator and agent of a presidential scheme to pressure Ukraine for political favors that amounts to a flagrant abuse of power.
If he implicates the President, Republicans need to shred the credibility of Sondland, the son of refugee parents who fled the Nazis, to dismantle a case that Trump tried to bribe the new Kiev government and should be removed.
If this scandal is to produce imagery of historic resonance like John Dean’s appearance before the Senate Watergate hearings or Oliver North’s stunning Iran Contra testimony, it is most likely come in Sondland’s trial by fire before millions of viewers.
The gregarious, and — according to some colleagues — power-grabbing envoy, will appear toward the end of two weeks of public testimony that has often been devastating for Trump.
Yet senior Republicans say there is so far no sign of the splintering of GOP support that could produce a two-thirds majority to oust the President in a Senate impeachment trial. Democrats hope that Sondland’s appearance could begin to shape public opinion — that has become more accommodating towards impeachment, irrevocably against the President.
Sondland’s appearance comes after Tuesday’s hearings in which Lt. Col. Alexander Vindman and vice presidential staffer Jennifer Williams devalued several key Republican talking points. They both agreed that that the President asked Ukraine for a favor in his own political interest rather than the national interest.
And two witnesses called by the GOP, former Ukraine envoy Kurt Volker and former NSC Russia expert Tim Morrison, not only failed to provide the total repudiation of Democratic narratives on which the White House had pinned its hope, but instead undermined the GOP line of attack.
The tough sledding on Capitol Hill has led to the extraordinary spectacle in recent days of Trump and the White House openly attacking witnesses who serve in their own government. It also saw Republican lawmakers impugn the patriotism of Ukraine-born Vindman, a refugee from the Soviet Union who wears a Purple Heart after being wounded in combat with the US Army.
Trump claimed on Wednesday, against available evidence, that the impeachment hearings were turning into a disaster for Democrats.
“The Republicans are absolutely killing it. They are doing so well because it’s a scam,” he said at a Cabinet meeting.
“They’re using this impeachment hoax for their own political gain to try and damage the Republican Party and damage the President, but it’s had the opposite effect.”
House Intelligence Committee Chairman Adam Schiff, a California Democrat who is running the impeachment hearings, however argues the process has shattered the core of Trump’s defense — that he was concerned above all with fighting corruption in Ukraine.
“The evidence points in the other direction,” Schiff said Wednesday, suggesting that the President’s goal all along was to harm former Vice President Joe Biden and his son Hunter, who had business dealings in Ukraine. “The evidence points in the direction of the President inviting Ukraine to engage in the corrupt act of investigating a US political opponent.”
There is no evidence of any wrongdoing by the Bidens in Ukraine.

Sondland, who is now the US ambassador to the European Union, has significant explaining to do on three key episodes.
They include talks at the White House between senior US and Ukrainian officials on July 10 when witnesses say he raised a deal for Kiev to open investigations in return for a presidential visit.
Officials in the meeting have testified that then national security adviser John Bolton quickly shut down the meeting after Sondland’s intervention.
Vindman testified Tuesday that in a subsequent huddle of officials in the White House ward room, Sondland said him that the probes were to be into the “Bidens, Burisma and 2016,” referring to a Ukrainian energy firm which had the ex-vice president’s son on its board.
The comment is important because it appears to show that no later than July 10, the Ukrainians understood that an Oval Office visit for President Volodymyr Zelensky was conditional on opening the investigations that Trump wanted to see.
Another pivotal turn in the scandal came when Sondland told a senior counterpart Andriy Yermak on September 1 that the release of US security aid was likely conditioned on Ukraine publicly announcing an investigation that would benefit Trump.
Sondland did not mention the conversation — in Warsaw during a Pence trip — in his initial closed doors deposition. But he amended his testimony after saying he remembered the call.
The encounter is one of the strongest pieces of evidence to support the case that Trump did require a quid pro quo from Ukraine in return for nearly $400 million in military aid.
Sondland may be asked whether his decision to change his testimony suggests a coverup if he reasoned that the Yermak conversation would emerge in other witness testimony.
On Tuesday, Democratic counsel Daniel Goldman asked Morrison what he knew about the content of the Warsaw conversation.
He replied: “That the Ukrainians would have to have the prosecutor general make a statement with respect to the investigations as a condition of having the aid lifted.”
This is more apparent evidence of a quid pro quo. If it is confirmed by Sondland’s personal testimony in a televised hearing it could seriously damage Trump’s defense.
The events surrounding the Warsaw meeting is a further example of the political box confining Sondland and shows how his and the President’s interests may diverge on Wednesday.

A stunning call from Kiev

The third episode that is sure to be drilled into by Democrats is Sondland’s call to Trump from the terrace of a Kiev restaurant on July 26 this year.
According to a US diplomat in Ukraine, David Holmes who overheard much of the call, Sondland told Trump that Zelensky was willing to open investigations he had request the day before in the now notorious presidential phone call. “He loves your ass,” Sondland said, according to a deposition by Holmes. 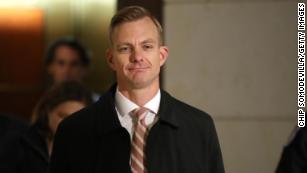 Source says Republican lawmakers ‘shaken’ by US official in Kiev’s testimony
When he got off the phone, after a conversation in which the President’s loud talking caused him to “wince,” Sondland said Trump doesn’t “give a s—t” about Ukraine, only about “big stuff” like an investigation into Biden, Holmes said.
Complicating Sondland’s position, Democrats have called Holmes to testify in public on Thursday — in an appearance that will be compared against the accuracy of the EU envoy’s statements.
One tactic for Republicans will be to suggest that Sondland may not have been operating at the direct behest of the President but was freelancing in pursuit of goals he assumed Trump wanted.
The question will be asked whether his eagerness to be a big time diplomatic player caused him to exercise authority he was not given or to leave an impression he was Trump’s man.
GOP questioners may be handicapped in that effort however since Sondland’s previous testimony was riddled with contradictions and omissions — including the July 26 call with Trump.

Democrats will want to know why Sondland — whose area of geographic authority did not even include non-EU nation Ukraine — came to be such an influential force in policy towards Kiev.
The Wall Street Journal reported last week that Sondland regularly kept the Trump administration officials like Energy Secretary Rick Perry and acting White House chief of staff Mick Mulvaney up to date with his efforts in Ukraine.
Fiona Hill, formerly the top Russia and European expert on the National Security Council said in her private deposition that Sondland suddenly claimed presidential authority to run Ukraine policy in May or June this year. She testified that his freelancing equated to driving with “no guardrails and no GPS on an unfamiliar territory.”
Hill is due to testify in public on Thursday with Holmes — the last scheduled day of televised hearings — and could flesh out more details of the back-door effort led by Sondland, Trump’s personal attorney Rudy Giuliani and Perry to go around official US policy channels in Ukraine.
Hill also testified that Sondland was sometimes “clueless” about the nature of intelligence threats and opened himself to eavesdropping by Russia with his use of texts and cell phones.
Another witness, Ambassador David Hale testified in a closed deposition that Sondland, as a political appointee, was often keen to demonstrate his influence.
He said, “He definitely wanted to know that he had direct access to the President, and he would often invoke the President’s name for certain things he wanted and he was pursuing.”

Omega-3: The treatment in search of an illness makes a comeback