Washington (CNN)Dramatic new disclosures on Day 1 of the House impeachment hearings painted an incriminating picture of Donald Trump as a President instinctively willing to sacrifice America’s interests for his own.

In the most critical step so far in the investigation into Trump’s alleged scheme to coerce Ukraine’s help for his reelection campaign, Democrats posed a question to every US citizen at the core of this dark national chapter.
“If this is not impeachable conduct, what is?” House Intelligence Chairman Adam Schiff, a California Democrat, asked, arguing that the republic’s values and the concept of an accountable presidency were at stake for future generations.
Using as their first witnesses two conscientious, apolitical diplomats who devoted their lives to national service, Democrats built a foundation for a case that Trump abused his far greater power. It is a story certain to play out again and again in the coming weeks as lawmakers contemplate whether to deal Trump the historic stigma of being only the third president to be impeached. 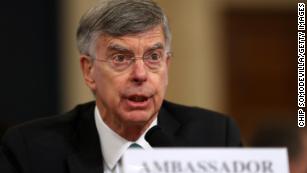 Impeachment hearing testimony further connects President to Ukraine pressure
In Wednesday’s most striking moment, the top US diplomat in Ukraine, Bill Taylor, revealed a previously undisclosed call between Trump and the US Ambassador the European Union Gordon Sondland, that took place a day after Trump’s notorious talk with Ukraine’s President in July.
He said that an aide — who heard the call on a mobile phone while in a restaurant in a scenario that raised national security concerns — reported that Trump asked Sondland about “the investigations” into former Vice President Joe Biden that he had requested from Ukrainian President Vlodymyr Zelensky.
Trump told reporters on Wednesday he had no memory of the event.
“I know nothing about that. First time I heard it,” Trump said at the White House. “In any event, it’s more secondhand information. I don’t recall it, not at all, not even a little bit.”
The new detail deals a blow to Republican claims that there is no evidence of any direct link between Trump and an attempt to pressure Ukraine into targeting Biden. Since Trump has previously claimed of Sondland: “I hardly know the gentleman” the testimony also poked new holes in Trump’s denials. And it raised already extreme pressure on Sondland himself, who is due to testify next week.
Taylor and his colleague George Kent, the deputy assistant secretary of state for European and Eurasian Affairs, also provided testimony to back up the theory that Trump demanded political dirt from on Biden.
In a political world ruled by fact and where polarized differences still allowed dispassionate debate, Trump’s position immeasurably worsened over an intense day of testimony.
But his Republican allies — who mostly defended him with bluster, conservative media conspiracy theories and process complaints underscored the daunting Democratic task ahead. The GOP’s attack dogs may have succeeded in complicating what Democrats hoped would be an easy to understand case that could convince the public of Trump’s malfeasance in a way that former special counsel Robert Mueller’s voluminous Russia report could not. Democrats will need to do more to crystallize all the coming testimony in a compelling and concise case that could change the political winds.

No collapse evident yet in Trump’s firewall 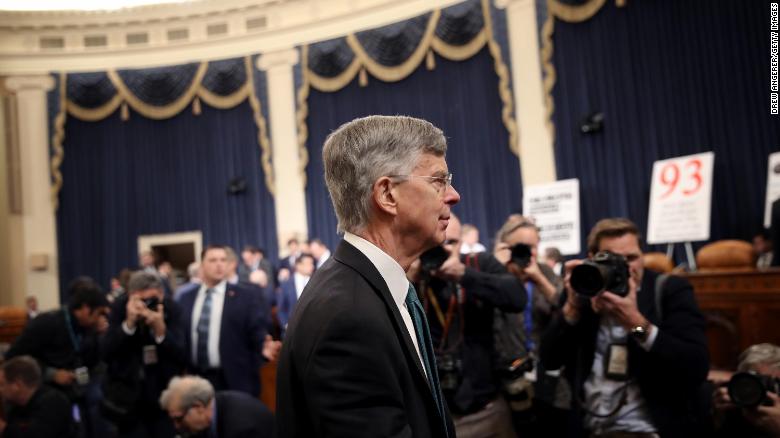 What the first public impeachment hearing tells us about the path forward
If Democrats are to pull off a long-shot bid to oust Trump, they need to break the dam of GOP support built up by a President who has an extraordinary hold on his party. Their longer term goal of so damaging Trump through impeachment that his 2020 race becomes a fool’s errand may be a more feasible goal.
At the outset of the hearings, there is no sign yet of a collapse in Trump’s Republican support.
Unlike in the Richard Nixon era, a battery of conservative media pundits, talk radio hosts and Trump supporters on Fox News prime time have the wattage to rally GOP voters and keep Trump’s Washington coalition intact.
Republican senators in any subsequent impeachment trial may however be a little more impervious to pressure than Trump’s crew in the House, especially those who face tough reelection races in swing states.
Still, one of Trump’s most committed champions, Ohio Rep. Jim Jordan, claimed Democrats’ opening gambit was a bust.
“I think it is a sad chapter for the country but frankly a good day for the facts and the President of the United States,” he said.
At times however, the GOP counter-attack misfired badly. At one point Republican counsel Stephen Castor, who struggled to establish a consistent line of questioning, caused Taylor to burst out laughing when he tried to get him to agree that Trump personal lawyer Rudy Giuliani’s backdoor Ukraine policy channel was not “as outlandish as it could be.”
“It’s not as outlandish as it could be, I agree,” Taylor said.
It could be days before it becomes clear how the Washington drama is playing in the nation as a whole.
But some voters in the crucial 2020 swing district of Maricopa County in Arizona did not like what they heard of the President’s conduct.
“I no longer recognize the Republican Party of my youth,” said 38-year-old Carly Rebuck, who did not vote for Trump last time and thinks he should be impeached.
Boyce O’Brien, a registered Republican who has lived in Phoenix for 22 years, also decried the GOP.
“Where are those Christian Republicans when it comes to integrity? They’ve ignored what this President has done,” he told CNN’s Kyung Lah.
But Kent Jeffers, a visiting Wisconsinite, said the hearings won’t shake his support for Trump.
“It’s a constant block of everything President Trump is trying to do. OK, Mueller didn’t get him. Other people didn’t get him. Now we need to find another narrative. I think everyone’s numb to it,” Jeffers said. 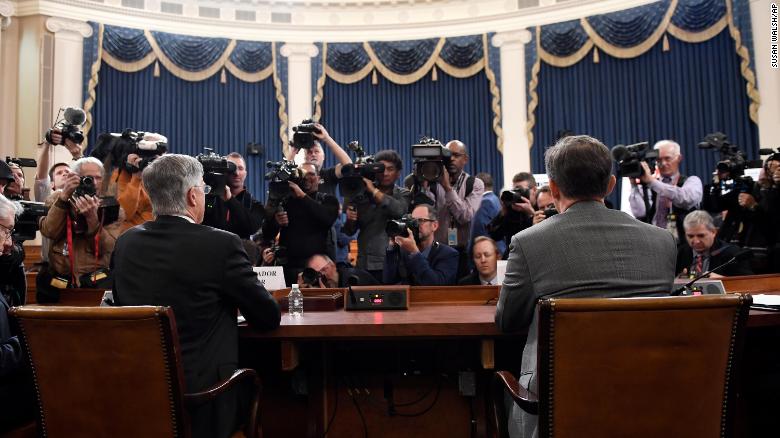 Most important takeaways from the first day of public impeachment hearings
The Democratic plan over the next two weeks is to keep up a drumbeat of testimony designed to prove that Trump hijacked America’s foreign policy interests for venal political gain.
This scheme allegedly ignored the desperation of a struggling democracy fighting a Russian invasion that needed $400 million in held-up US military aid to survive.
As Taylor, paraphrasing a comment by Sondland, put it: Trump “cares more about the investigations of Biden” than Ukraine.
Wednesday was a day of contrasts.
Taylor and his bow tied colleague Kent emerged from the obscurity of decades of service in the Foreign Service to put on a show of duty and restraint that marked a sharp distinction from the hyper-partisan hothouse in the House hearing room.
A Vietnam war veteran who went against his better judgment to go back to Kiev to replace Marie “Masha” Yovanovitch, Taylor repeatedly reminded lawmakers he had no political motivation.
Kent and Taylor were both the epitome of the post-World War II diplomatic consensus that sees America’s interests best advanced through global leadership and transatlantic alliances.
“Europe’s security and prosperity contributed to our security and prosperity,” Kent said.
But this is a conventional, establishment worldview that Trump, with his “America First” outlook and mistrust of allies he sees as freeloaders, wants to destroy.
Rep. Devin Nunes, a staunch Trump ally, branded both witnesses as denizens of a “politicized bureaucracy” that had caused immense damage to Americans’ faith in government.
“Elements of the civil service have decided that they, not the President, are really in charge,” the California Republican said.
As if to underline the gulf in the rival visions of America’s global role, Trump appeared at a news conference with Turkish strongman President Recep Tayyip Erdoğan as the hearing ended.
The President heaped praise on Erdoğan, whose forces assaulted America’s Kurdish allies in a recent operation in Syria greenlit by Trump. And in another affront to traditional US values, Trump joked about Erdoğan’s friendly press pack. Journalists have been rounded up and imprisoned in droves in Turkey.
For Schiff, the next few weeks are about proving that Trump’s values and behavior are inconsistent with the expectations of a president.
In his closing statement he said the process was about “whether we’re prepared to accept in the presence of the United States a situation where the President, for their own personal or political benefit can condition military aid, diplomatic meetings or any other performance of an official act in order to get help in their reelection.”

Alberta medical examiner’s office may have lost culture of respect for the dead, expert says

High blood pressure symptoms: Seven signs you could be having a hypertensive crisis