And that’s a big deal if you know pageant history.
Beauty pageants early in their histories, some dating back to the 1920s, barred women of color from participating. Even after organizations began changing their rules to accept women of all races, there was still a lingering frustration and opposition to join.
Only in the last 50 years have black women become more prevalent in these competitions. Janelle Commissiong was the first black Miss Universe in 1977, Vanessa Williams was the first black Miss America in 1983, and Carole Anne-Marie Gist, the first black Miss USA contestant, was crowned in 1990. The following year Janel Bishop became the first black Miss Teen USA.
When Zozibini Tunzi of South Africa was named Miss Universe on Sunday, she joined a historic group of black women, along with 2019 Miss USA Cheslie Kryst, 2019 Miss Teen USA Kaliegh Garris and 2019 Miss America Nia Franklin.
Here’s what you should know about these four women: 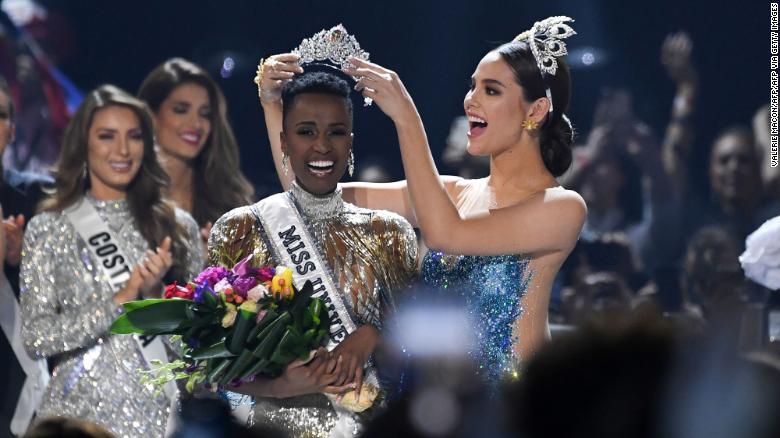 Tunzi hails from the town of Tsolo in the Eastern Cape of South Africa. Along with English, the 26-year-old speaks Xhosa and has launched a social media campaign against gender-based violence.
In a recent Instagram post, she called on her fellow South Africans to write love letters pledging support for women in her country.
“It is my hope that these pledges will start, and continue a conversation around gender-based violence,” Tunzi wrote. “We have to start the narration where right-thinking people act as role models for those who think it’s okay to mistreat women.”
At the Miss Universe pageant, Tunzi spoke about how conventional beauty standards haven’t typically included skin and hair like hers, encouraging women to embrace themselves and love who they are.
“I grew up in a world where a woman who looks like me — with my kind of skin and my kind of hair — was never considered to be beautiful,” she said in her last response before she was crowned. “I think it is time that that stops today. I want children to look at me and see my face and I want them to see their faces reflected in mine.”

Lily Allen opens up about addiction to Adderall for weight loss

John Singleton, director of Boyz N the Hood, dies at 51

Actress Felicity Huffman sentenced to 14 days in prison in U.S....