The Chinese government’s carefully constructed narrative around its Xinjiang detention centers appears to have been shattered by hundreds of pages of leaked documents published by Western media over the last two weeks.

Beijing has long insisted that its vast camps are voluntary “vocational training centers,” where people learn job skills and are then free to leave.
Yet the leaks paint a grim picture of heavily fortified re-education centers, designed to turn Uyghurs and other Muslim minorities into good Chinese citizens who also speak Mandarin.
And the students can’t leave until they have become just that.
There has been nothing yet to indicate the documents are fake — both the New York Times and the International Consortium of Investigative Journalists have published the original versions or verbatim copies on their websites. Even China’s Ministry of Foreign Affairs has not directly disputed their authenticity.
“For all its efforts at secrecy, the Chinese government can no longer hide the extent, and the reach, of its campaign of repression in Xinjiang,” regional expert Adrian Zenz wrote in an opinion piece in the New York Times this week.
The leaks are hugely embarrassing for Beijing, and there is almost certainly a hunt for the culprit happening now.
But don’t expect the Chinese government to demolish the camps and apologize.
The crackdown followed a series of terrorist attacks in the far western region, which has a long history of unrest and protests. Beijing often states that there hasn’t been a major incident in the region since 2015, something it attributes to the government’s highly controversial policies.
And as far as Beijing is concerned, the world is on its side. By its numbers, more countries have publicly voiced support for China’s controversial anti-radicalization policies than opposed them. 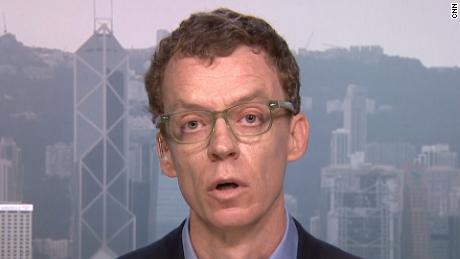 The leaked documents are far from the first revelation of human rights violations inside the Xinjiang camps.
Ever since the Chinese government first began setting up the centers in 2017, former and current detainees — as well as their relatives — have gone public with horror stories from the inside. CNN has published stories of a Uyghur journalist who condemned the campaign as “cultural genocide,” and a former teacher in the camps who described brainwashing and abuse behind barbed wire.
The US State Department has estimated that up to two million Uyghurs and other minorities could be imprisoned. In October, Washington announced visa restrictions on Chinese officials associated with the camps.
But the reports and condemnation haven’t provoked any public back-down from the Chinese government. If anything, it has stuck to its guns even harder.
“Let me reiterate our position that Xinjiang affairs are China’s internal affairs,” Chinese Foreign Ministry spokesman Geng Shuang said on Monday after the latest leak. 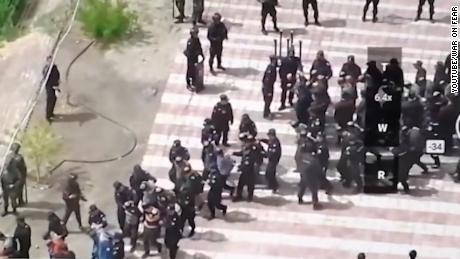 Video shows hundreds of blindfolded and bound men 04:23
“Certain media are trying to smear China’s counter-terrorism and de-radicalization efforts in Xinjiang by despicably hyping up Xinjiang-related issues, but their attempts will not succeed. Stability, ethnic solidarity and harmony in Xinjiang is the best response to such disinformation.”
In July, one of Xinjiang’s top government officials claimed the camps were mostly empty, which subsequent investigations suggest is untrue. There is even evidence the local government is extending its crackdown to erase traditional Uyghur graveyards in Xinjiang.
From China’s perspective, there is not a consensus against them in the international community.
At the UN General Assembly in late October, 23 mostly Western countries came forward to make a strong, official statement criticizing Beijing’s Xinjiang detention centers. In response, Belarus issued a statement claiming 54 countries were in support of the Xinjiang system. Not all signatories were revealed, but a similar statement in July included several Muslim countries, such as Saudi Arabia, Pakistan and Iran.
With some of the world’s most prominent Muslim nations signaling their support, why would China back down in the face of a few leaks? 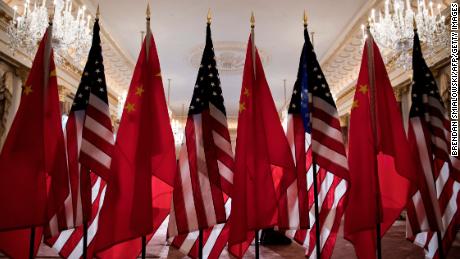 US blacklists 28 Chinese organizations and companies 00:45

One event has the potential to tip the balance. In February 2022, Beijing is due to host the Winter Olympics for the first time — and China is sparing no expense
The 2008 Summer Olympics in the Chinese capital were a spectacular re-emergence on the world stage for a country that was heavily impoverished just a few decades ago.
Now the government wants to repeat that moment. But if the revelations over Xinjiang continue to mount, and Western condemnation grows, there could be significant pressure on countries to boycott the 2022 Games.
Some commentators are already suggesting that the international community could use the games to send a strong message.
Writing for the Diplomat in his capacity as a private citizen, US Navy Lieutenant Commander Evan Karlik said a coordinated international boycott would be an “embarrassing flop for Beijing.”
He said such a boycott would be similar to the one in 1980, when 56 countries dropped out of the 1980 Moscow Olympics in protest over the Soviet invasion of Afghanistan.
“President Donald Trump and the United States Olympic Committee should jointly announce that the American delegation will boycott the Beijing Winter Olympics unless Xinjiang’s internment camps are shuttered and subsequently demolished,” he said.
Still, the Chinese government remains adamant that its policies in Xinjiang have made the region safer and more prosperous.
And it is a rare day when Beijing backs down — even in the face of global condemnation.

General Motors is killing off the Holden brand and pulling out...

Mozambique cyclone survivors out of reach of humanitarian aid