If you’re planning on traveling Wednesday, be prepared.

Two massive storms are pounding the US from Oregon to New York with some combination of snow, rain and high winds as millions of people take to the roads and skies ahead of the Thanksgiving holiday.
Blizzard and high wind warnings are in effect across the Western states including Oregon, California, Nevada and Idaho as a “historic, unprecedented” storm began dumping rain over the region, the National Weather Service said.
Track the storms
“This intense storm will go on to produce widespread disruptions and potentially dangerous travel conditions across the Rockies and Great Plains through Saturday, before moving across the Great Lakes into the Northeast Sunday and Monday,” the center’s Weather Prediction Center said.

A little #GOES17 satellite eye candy for you on this Tuesday evening! An impressive low pressure system is moving onshore near the Oregon/California border and is bringing very strong winds and feet of snow the mountains! #orwx #cawx #BombCyclone 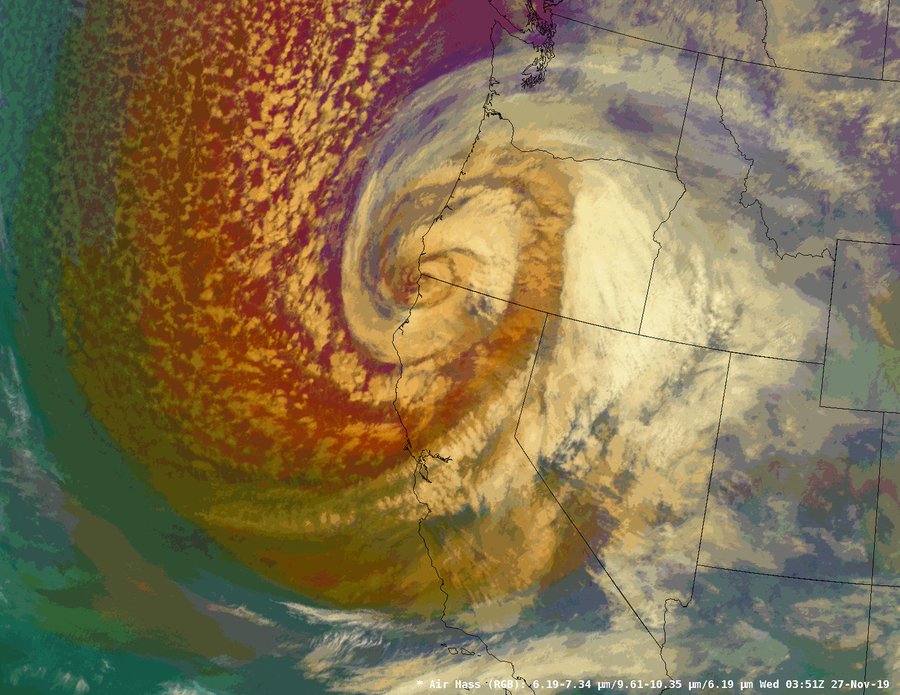 153 people are talking about this
It’s also begun to dump heavy snow — with some mountain ranges in eastern California measuring snow piles in feet Wednesday, the weather service said.
In Oregon, Department of Transportation officials reported whiteout and blizzard conditions, urging drivers in affected roadways to pull over. In Arizona, the weather service warned of “impossible travel conditions” Thursday and early Friday with heavy and drifting snow.
Significant travel delays and road closures because of dangerous travel conditions were also expected across California, the service said.
In Santa Barbara County, officials issued a Debris Flow Evacuation Warning Tuesday night after heavy rainfall around the area burned by the Cave Fire. 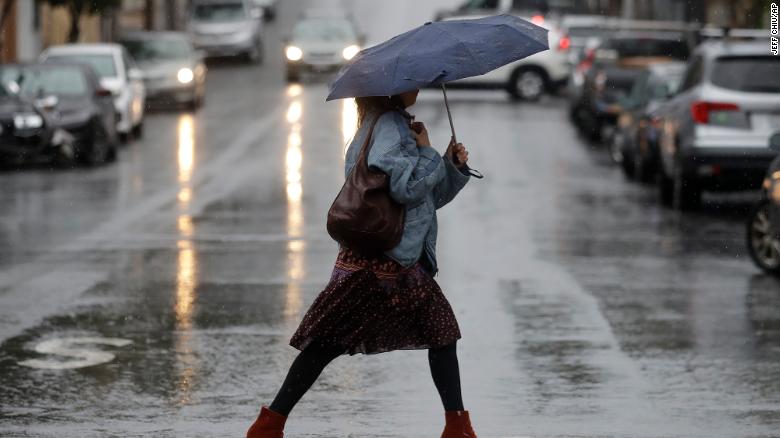 A woman walking in the rain in San Francisco Tuesday
“If you live or are near creeks and streams be aware that they may experience high flows and can rise quickly. If a debris flow occurs, and it is unsafe to leave, or you are unable to leave, go to high ground,” the county said.
Meanwhile, another major storm was making its way over the Midwest Wednesday.

That storm unleashed powerful winds and dumped snow and rain over the Plains Tuesday and moved over the upper Midwest Wednesday dumping snow from Nebraska to Wisconsin, CNN meteorologist Michael Guy said.
Parts of Minnesota, Wisconsin and the Upper Peninsula of Michigan will see up to a foot of snow — with some areas receiving up to 14 inches, the weather service said.
“Gusty winds will also cause blowing and drifting snow, as well as reduced visibility causing whiteout conditions,” it said.
In Missouri, the weather service reported severe winds Tuesday night.
“Please (make) sure any loose articles around your house are secure,” it said. “If driving, 2 hands on the wheel!”

The storm system’s winds — whipping Oklahoma to New York — have already had some disastrous effects.
In Oklahoma, officials reported at least 26 wildfires, activating the State Emergency Operations Center.
And as the fires forced some residents in two counties to evacuate their homes, more than 15,000 others across the state lost power.
Strong southwest winds pushed a “rapid spread” of fires, the weather service in Norman, Oklahoma, said.
Late Tuesday, shifting winds hampered firefighters’ efforts and pushed a fire toward the town of Fargo, in the northwestern part of the state.
In New York, the fierce winds are even threatening to ground the famous balloons in the Macy’s Thanksgiving Day Parade.

‘STUBBORN!’ May SQUIRMS as Yvette Cooper LASHES OUT over Brexit standoff

Hand luggage: Why travellers should always pack this extra item to...

Cancer survivor who dared N.S. premier to talk to her about...